Twin babies who need extra care when they are born will be able to stay together in the neonatal unit at Basingstoke and North Hampshire Hospital thanks to the efforts of a group of fundraisers. 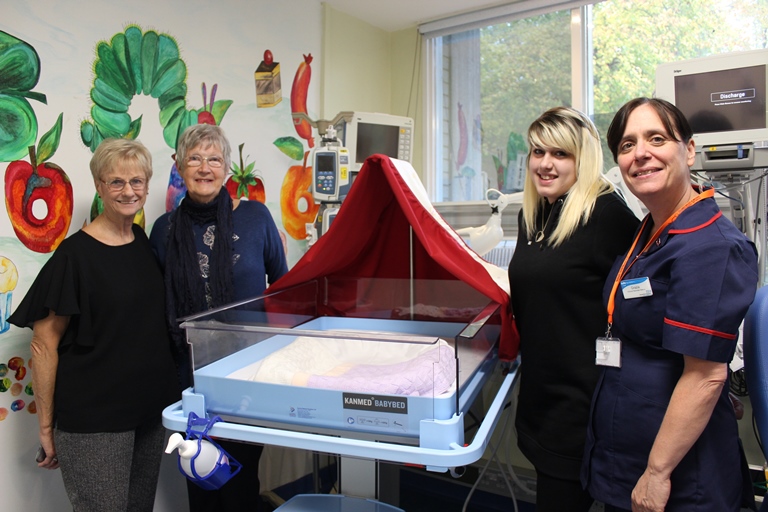 June Bond decided she wanted to help other parents with twins after her granddaughter, Jemma Lewis, gave birth to identical twin boys, Jacob and Joey.

The twins arrived 11 weeks early after being diagnosed with a condition that meant they were receiving an unequal flow of blood. Both needed extra care when they were born, with Jacob transferred to Queen Alexandra Hospital, in Portsmouth, for specialist treatment, while Joey stayed in Basingstoke.

June said: “Jacob was reunited with Jemma and Joey shortly after receiving the expert care he needed.

“When the twins reached the age of three, Jemma and I decided to raise money for the neonatal unit. We had a discussion with the matron who was thrilled by our offer and suggested a twin cot to house newborn twins together and keep them close to their families.”

The event raised an incredible £1,700, which was donated to the Hampshire Hospitals Charity and used to purchase the twin cot, which enable twins to be nursed together in the same cot. This has been shown to help babies, stabilising their heart rates, allowing them to better regulate their body temperatures and meaning they stay close together, as they had been in the womb.

June said: “Seeing the twin cot on the ward and hearing stories from staff about the positive effect our donation has had on parents and their babies has been fantastic.

“We can’t thank the staff who looked after Jemma during and after her pregnancy enough. They showed great care for our twin boys. Jacob and Joey have just started school, but they would not be here without the incredible work of the staff here.”

Grazia Sinar, clinical matron in the child’s health unit at Hampshire Hospitals NHS Foundation Trust, which runs Basingstoke hospital, as well as Andover War Memorial Hospital and Royal Hampshire County Hospital, in Winchester, said: “We are very grateful for the kind donation of this twin cot, which has already been used by several twins staying with us. Parents have said how happy they are that their babies can be together during this vital time.”