Hospital staff came together to celebrate members of the Armed Forces within their ranks at an event held by Hampshire Hospitals NHS Foundation Trust to mark Armed Forces Week.

Reservists, veterans and those with a close family military connection from clinical and non-clinical teams across the Trust, including emergency departments and theatres, were welcomed to the event.

Nichola Jones, associate director of pharmacy for Hampshire Hospitals NHS Foundation Trust, which runs Andover War Memorial Hospital, Basingstoke and North Hampshire Hospital and Royal Hampshire County Hospital in Winchester, was one of the many who attended and swapped pharmacy green for Royal Air Force blue. 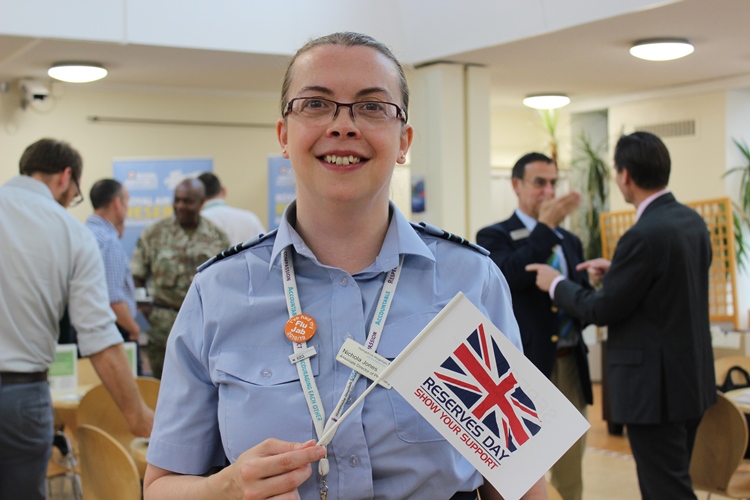 Outside of helping to deliver pharmacy services for patients in Basingstoke, Andover and Winchester, Nichola spends two evenings a week as a training officer for the 1105 City of Winchester RAF Air Cadet squadron, where she helps to run a programme to support young cadets complete a BTEC qualification.

Nichola said: “It’s been fantastic to see staff come together from all over the Trust to celebrate the week. When I was young, being a cadet helped to shape who I am, so I wanted to give back and support other young people to have the same valuable experiences, and I’m still doing it 16 years later! I get a lot of support from the Trust to accommodate my connection to the Armed Forces, which I am very grateful for.

“There is a huge overlap between the work of the NHS and the Armed Forces, particularly as both rely so heavily on teamwork. There is a great resource through the shared workforce and knowledge between the different organisations, and I’m always encouraged to see Hampshire Hospitals actively recruiting in the Armed Forces community.”

Hampshire Hospitals is committed to supporting the armed forces as an employer and was presented with the Ministry of Defence’s Employer Recognition Scheme (ERS) Gold Award by Prince Harry, Duke of Sussex, in 2017.

Hampshire Hospitals NHS Foundation Trust recently also received accreditation as a ‘Veteran Aware’ Trust in recognition of its commitment to improving NHS care for veterans, reservists, members of the armed forces and their families.

The accreditation, from the Veterans Covenant Hospital Alliance (VCHA), acknowledges the Trust’s commitment to a number of key pledges, including supporting veterans, reservists and service families by making them aware of appropriate charities or NHS services, and ensuring staff are aware of the possible needs of veterans.

The Trust is now one of 33 members of the VCHA and is part of only the second wave of Trusts to be accredited.

Alex Whitfield, chief executive of Hampshire Hospitals, said: “It’s been wonderful to bring members of our team together to recognise and celebrate all that those in the Armed Forces community do in our hospitals, including staff, volunteers and carers. Colleagues from the Armed Forces and the NHS share a commitment to public service and working in teams in the service of others.

“As a Trust we are incredibly proud of our commitment to working with the Armed Forces community, in order to provide the best possible care to our patients, and I want to add my thanks for all of the ways they support our patients and our local communities.”